The Indonesian central bank, Bank Indonesia, officially launched the new 2,000 Rupiah banknote last week. The banknote, which has a value of approximately US 20 cents, will eventually replace the 1,000 Rupiah note as the smallest note in Indonesia.

The mainly gray-colored note features an image of Prince Antasari on the front.  He is a national hero from Banjarmasin in South Kalimantan.  On the back is a drawing of a traditional Dayak dance.

It is expected that 1.2 million notes will be on the streets by the end of the year. 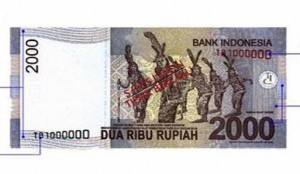