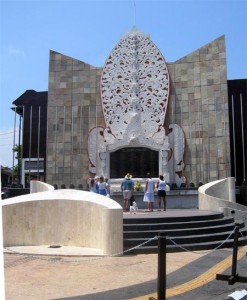 In response to reports that beggars and prostitutes were disturbing visitors in the vicinity of Ground Zero and the Bali Bombing Memorial, sweeping raids were conducted in the area on 1 July.

The evening raids netted a total 37 beggars, 11 commercial sex workers, 19 transvestites, 3 people with no identity cards and 2 improperly parked taxis. Most of the arrests were made in the vicinity of the Bali Bombing Monument.

Most of those arrested had their personal details taken for processing on public nuisance complaints. However, the beggars, many of whom were children, were rounded up for eventual return to their home villages.

The raids were made after receiving numerous complaints from local residents of the nuisance caused by the transient street workers.

Just posted this latest video on YouTube.  It’s a quick 2 minutes on the action at Kuta Beach.

Hope you enjoy it.