(17/4/2010) The Jakarta Globe carries the news that visitors to Bali can now expect yet another delay in the notoriously long lines at customs and immigration at Bali’s Ngurah Rai Airport with the introduction of a mandatory fingerprinting for tourist visitors.

The head of immigration’s sub directorate for Information-systems, Rohadi Iman Santoso, has announced the new requirement to be introduced at Bali’s airport, with subsequent implementation planned at all international gateways in Indonesia.

The fingerprinting, carried out with ink-less electronic fingerprint readers, will only be required for those using short-stay visas. Foreigners who have permanent or temporary stay permits and who have already been fingerprinted in the process of obtaining their residency in Indonesia are exempted from the new requirement. Children under the age of 14 and those traveling on diplomatic passports are also exempted from the requirement.

Rohadi also announced that tourist visitors would also be photographed using a system that completes the process in 2 minutes.

Rohadi acknowledged that the new requirement would add to the delay for those processing through Bali’s immigration and customs process. Only 10 of the 23 immigration counters at the airport will be initially equipped with the fingerprint scanner.

The system will be introduced nation-wide by July 2010 with scanners then in place at 21 airports, five seaports and at the border crossing between Malaysia and Indonesia at Entikong. The trial introduction now underway is fingerprinting visitors arriving in Bali, Jakarta, Yogyakarta and Solo.

The immigration department has apparently seen little need to socialize the new fingerprinting system with Surya Dharma, a spokesman for the Ministry of Culture and Tourism, and Ngurah Wijaya, the head of the Bali Tourism Board, claiming no knowledge of the new system.

Biometric screening procedures are already in effect in a number of countries such as Australia, Canada, New Zealand, South Africa, Spain and the United States.

This story is reproduced with the permission of Bali Discovery Tours         http://www.balidiscovery.com

The Bali Driver takes you on a trip to Kintamani and Mount Batur.

Head towards the center of the island traveling through the magnificent terraced rice fields.  At the top of the climb you will see the recently active Mount Batur and the peaceful Lake Batur below.  The diverse scenery you will see here is another one of the treasures of a Bali visit. 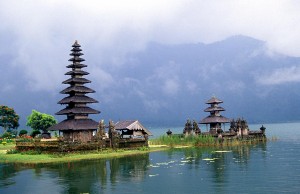 Travel & Leisure Magazine has concluded its annual survey of the discerning travelers who comprise its readership asking them to name their favorite cities, islands, hotels, resorts, airlines, cruise ships and even rental car agencies.

Bali has topped the poll and is regarded as the world’s best island.

For many years, Bali consistently ranked as the world’s best island in the prestigious poll, slipping momentarily in the 2008 polling to the number two slot. However, the 2009 Travel & Leisure survey has returned Bali to the coveted number 1 spot, followed by Galapagos, which displaced Bali in the 2008 rankings.

Reproduced with the permission of Bali Discovery Tours       http://www.balidiscovery.com

Jakarta Bombing – What is Bali Doing?

Friday terrorists detonated bombs at the Ritz-Carlton and Marriott Hotels in Jakarta.  55 people were injured and 8 killed in the blasts.

Since then, Bali has taken a number of steps to improve security on the island, including:

• The island’s security status was raise to the highest level of “siaga satu” by the island’s Chief of Police, Inspector General T. Ashikin Husein, putting some 12,000 security personal on duty and at the highest state of readiness.

• Bali’s sea ports and single airport were tightened up with careful checks introduced for both materials and people traveling to the island.

• Within minutes of the blasts in Jakarta, the Bali Hotel Association (BHA) told its members to raise their security levels to “red” – bringing pre-existing security screens and surveillance procedures to their highest level.

• Hotel, restaurant and travel agency staff have been briefed by their respective stakeholder organizations to remain calm and focus on the comfort and safety of island visitors, avoiding speculation and rumors in connection with the Jakarta attacks.

• A check of several hotels and the Bali airport do not provide proof of any mass exodus of visitors following the Jakarta bombings.

• The Governor’s office has issued written instructions to mayors and regency heads, ordering heightened security measures and complete cooperation with the police in introducing security checks in every district of the province.

• The regional administration is moving “full ahead” with plans to enhance security measures by a self-imposed August deadlines that will see 33 emergency service units distributed across the island, the installation of 1,000 closed circuit TV and the operation of a crisis center charged with crisis management for Bali.

An article published by BaliDiscovery.com was titled “Head Hunting Season Now Open”.  It went on to say…….

China National Tourism Authority (CNTA) has called on Indonesia to stop the practice of “selling heads” among Chinese tourists visiting the country.

“Selling Heads” is the practice in which the right to guide visiting Chinese tourists is purchased by travel agents and guides who then recoup their investment through oftentimes exorbitant commissions received from restaurants and shops.

Eddy Sunyoto, an Indonesian official of the Travel Agents Association, admitted that a number of registered travel agents are actively engaged in “selling heads” when serving Chinese travellers. 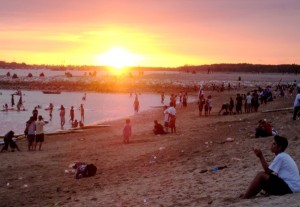 As predicted by balidiscovery.com, April 2009 also saw the historical unseating of Japan by Australia from its top-ranking as the largest source market for Bali. Through the end of the first four months of 2009 Australian arrivals totaled 102,179 – increasing 30.08% as compared to the same period in 2008. Meanwhile, reflecting their troubled national economy, Japanese visitors decreased 7.45% for the first 4 months of 2009.

Similarly, South Korea, which is traditionally Bali #3 source market, declined to a #5 ranking as that nation’s economy faltered and arrivals dipped 5.62% over the first four months of 2009. Taiwan which has long been Bali’s #4 market, is now relegated to the #7 position.

Reproduced with the permission of Bali Discovery Tours. http://www.balidiscovery.com 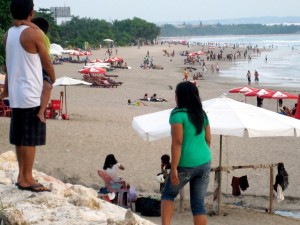 The current global financial crisis has had little affect on tourism in Bali.

Bali has experienced solid growth in tourist numbers between January and May this year.  The total number of tourists visiting Bali in March was 168,205, an increase of 4.66% on last year.

It is not known if the political situation in Thailand has any bearing on the increased numbers.

Authorities do say however, that the improvements in security measures in Bali have made foreign tourists feel more comfortable.