Julia Roberts and Javier Bardem shook off controversy over their new movie as they filmed a romantic scene in Bali yesterday.

The Oscar-winning actress, who turns 42 this week, stripped down to a string bikini as she cosied up to her on-screen lover for their new film Eat, Pray, Love.

The pair resumed filming after locals in the village of Bentuyung attempted to disrupt the movie in a row over pay.

Roberts has been filming the big-screen adaptation of Elizabeth Gilbert’s best-selling book in Italy, India and Indonesia in recent weeks. 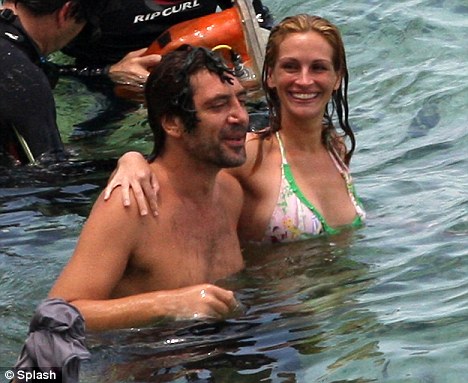 It has been reported that Julia Roberts is in Bali for the filming of Eat Pray Love.  Everyone is quite sure she is here, but no-one has seen her.

A village north of Ubud was overtaken by a film production crew on Friday and Saturday, but roads were closed and the security was very tight.  The film crew moved out late Saturday and headed south.

It is understood that further filming will be done in the Ubud area, as well as Uluwatu and Nusa Dua, but none of the details are known.

The media hounds are having a rough time of it.  It seems the locals are all prepared to give information, but it always ends up at a dead end.

Famous movie star Julia Roberts is expected in Bali for the filming of “Eat Pray Love” to commence on 16 October.

According to Jakarta Globe, permits have been issued for the filming in Bali, with Roberts due on set from 16 October to 6 November.

“We have issued the permit to shoot in Gianyar. Their preparation is complete,” said Ida Bagus Puruvita, the Gianyar cultural office’s chief of permits and films.

The shoot is planned to take place at the traditional markets and Monkey Forest in Ubud, along with the nearby villages of Demayu and Tegalalang, and in Badung, Uluwatu and Nusa Dua.

Permits for these locations were obtained by the official representative of the production crew, Tino Taroengallo.

Read the Full Story from the Jakarta Globe

Security is expected to be extremely tight when Julia Roberts comes to Bali for the filming of the Movie “Eat Pray Love”.

During the filming in India, India eNews reported that she had 350 security personnel, including police and private security guards.

Almost 350 security men, bulletproof cars and a chopper too – that’s what it takes to secure Hollywood star Julia Roberts, who is here with her three children to shoot for the movie ‘Eat, Pray, Love’. 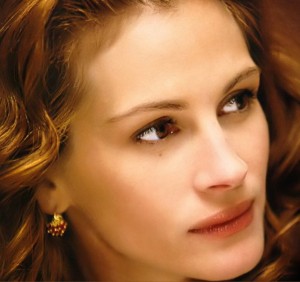 Julia Roberts stars as the book’s narrator, and Brad Pitt and Dede Gardner will produce the film.

The book, which traces Gilbert’s search for identity across four countries following her divorce, topped six million sales in the US alone.  With shooting in New York, Italy, Delhi and Bali, the film of the bestseller is expected to be a blockbuster at box offices around the globe.

Director, Ryan Murphy, is currently scouting locations in Gianyar, Karangasem and Jimbaran, with much of the filming planned around the hillside village of Ubud.